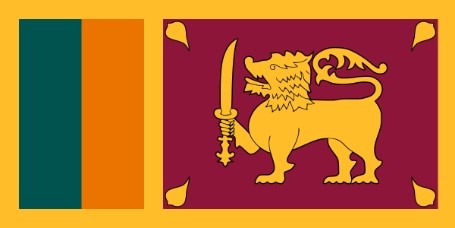 The National Flag of Sri Lanka represents the country and her heritage as rallying device that integrates the minorities with the majority race.

Sri Lanka National Flag is an improvisation of the civil standard of the last king of Sri Lanka, Sri Wickrama Rajasingha.

The civil standard had a passant royal lion with a sword in it’s right fore paw at the center, and a bo-leaf on each of the four corners on a plain border.

When Sri Lanka gained her independence from Great Britain on February 04, 1948, it was the lion flag of the last king of Sri Lanka was hoisted once again.

The first Prime Minister of independent Sri Lanka, D.S.Senanayake, appointed a committee to advice the government on the design of a new national flag. The design approved by the committee in February 1950 retained the symbol of the lion with the sword and the bo-leaves from the civil standard of the last king of Sri Lanka, with the inclusion of two vertical stripes green and orange in color.

The significance of each symbol of the national flag is as follows:

The national flag was hoisted for the first time on March 3, 1950.